Click here for Video.
Posted by PRINTANA at 4:57 PM

Numerous artists at this site.
Posted by PRINTANA at 7:46 PM 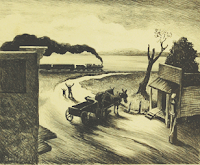 The Montana Museum of Art and Culture has a wonderful print exhibition entitled "By the People, For the People: New Deal Prints from the 1930's and 1940's currently on view.
November 13-December 19th.
Click here for more details.
Posted by PRINTANA at 4:55 PM

Sylvia's gorgeously creepy paintings are brimming with a mixture of sexual provocation and consternation. Images of beautiful women resembling Marie Antoinette in Día de los Muertos face paint. Miss Ji’s interest in art was implanted at a very young age when she would look through her mother’s sketchbooks and watch her father paint. In her art, she explores themes of beauty, sexual provocation, and social notions of femininity, juxtaposed against the dystopian reality of modern cities to create highly charged paintings of women. Some of her paintings are symbolic reflections of herself, portraits of people she knows or just nameless faces set in a landscape of fleeting beauty. She graduated with distinction in 2005 from the Academy of Art University of San Francisco with a Bachelors in Illustration and had her first ambitious and successful solo show while still in her last year of school. Since then she has been in high demand, keeping continuously engaged in an onslought of numerous shows on the West Coast.
More here: UK print gallery: Personal Website:
Posted by PRINTANA at 9:24 AM

Go to his website by clicking HERE.
Posted by PRINTANA at 2:35 PM 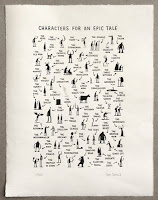 Check out the rest of his images at TOMGAULD.com by clicking here.

And also this site BUENAVENTURA PRESS a real "Printstitution" as Ben put it.
Posted by PRINTANA at 9:54 AM


This is just funny.
Posted by PRINTANA at 5:05 PM

The Eyewriter from Evan Roth on Vimeo.

Artist Blu shows off his latest and greatest street piece in the streets of Bogota, Columbia. As witty as ever, both mural sized artworks showcase a socially conscience theme with the drug/death references. Both were put in place for “Memoria Canalla”. Definitely another great installation for one of the more well-respected street artists in the scene.
Posted by PRINTANA at 7:30 PM

And National Forest.com Site is here.
Posted by PRINTANA at 11:56 AM 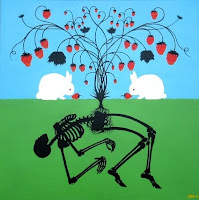 And check out WORLD PRINTMAKERS by clicking here.
Posted by PRINTANA at 12:51 PM