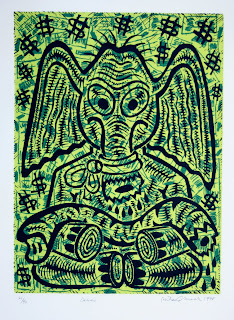 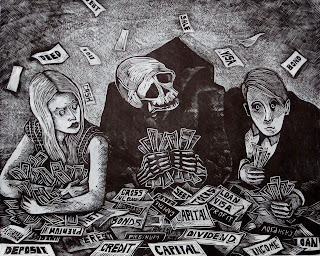 This exhibition includes approximately 40 prints created through MATRIX Press, by nationally recognized artists over the course of the past twelve years. The prints from the MATRIX Press collection represent a broad range of artistic and technical approaches to the print.

Artists represented in this exhibition include those who have continued the activist tradition of printmaking such as Richard Mock, best known for his cutting political prints that appeared in the New York Times Op-Ed section from 1980-1996 and Miriam Schapiro who was one of the pioneering artists in the Feminist Art movement to Tom Huck, known for his intricately cut woodcuts inspired by the likes of Albrecht Durer. In addition, Colorful abstractions by Arizona artist and past UM alumni John Armstrong show a softer approach to the medium with his whimsical forms, which often reference the landscape. Chicago based artist Tony Fitzpatrick utilizes 50’s style tattoo art in his color etchings, while Canadian Artist Peter Von Tiesenhausen’s boat forms float mysteriously on metallic fields.
-James Bailey

The University of Montana-Western, Dillion, MT
(November 1 - November 30, 2011)
Professor James Bailey will be giving a gallery talk on Matrix Press and the artists included in the exhibition on Wednesday, November 9th at 6:30 pm in the gallery.